In Memory of
John E. "Jack"
Killam
1922 - 2018
Click above to light a memorial candle.
Memorial Candle Tribute From
Krueger Funeral Home
"We are honored to provide this Book of Memories to the family."
View full message >>>
Send Flowers
Menu

In the event that there is an error
in the information presented,
please contact the funeral
home by clicking here. 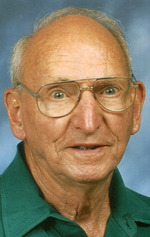 John E. "Jack" Killam, 96, of Lake Street in Sandy Creek, passed away Wednesday, August 1st. Jack was born and raised in Sandy Creek. He was the son of the late Hugh T. and Barbara (Bemis) Killam and a 1940 graduate of Sandy Creek High School. Jack briefly worked for Bell Air Craft before entering in the US Army. As a veteran of World War II, he was stationed in Los Alamos as a T-3 in 1944. Jack worked at the machine shop and at the Fire Dept. as an Inspector during the Manhattan Project until after the bomb was developed and deployed in Japan ending the war. After the war, he returned to NY with his wife and new daughter. They settled in Locke in 1946 where Jack worked for Lynch's Hardware and co-owned and operated Bossard & Killam Plumbing, Heating & Electric. During this time, Jack became the Fire Chief and was elected Town Councilman. In 1963, he moved his family back to Sandy Creek into the family homestead on Lake Street. Jack worked for several years as a self employed contractor and later retired in 1987 from Black Clawson in Watertown after more than 20 years as a maintenance electrician. Although he retired from active duty, Jack was still a member of Sandy Creek Volunteer Fire Dept. where he worked Bingo and assisted at the Oswego County Fair every year. He served as the Captain of the Fire Police for many years. Jack was a long time member of the Sandy Creek United Methodist Church and a member of their Administrative Council, a Trustee for many years and later as Trustee Emeritus. Jack enjoyed rebuilding antique engines and water pumps. He would demonstrate how they should operate and function at various County Fairs including: Lewis County, Oswego County, Canandaigua, and the NY State Fair. He was always the first person people would call on to help out when they needed assistance or something fixed and will be greatly missed.

To send flowers to the family or plant a tree in memory of John E. "Jack" Killam, please visit our Heartfelt Sympathies Store.