To share your memory on the wall of Robert Zacholl, sign in using one of the following options:

At the height of the Vietnam War, Bob volunteered for the army where he spent three years and served a tour of duty as a platoon leader in Vietnam, an experience of which he was very proud. His tour ended in 1971 and he came home to a fellowship program at Springfield College. Armed with a master’s degree in physical education, Bob began his teaching career in the North Syracuse School District in 1972. His first position was at Lakeshore Elementary School where he met a teacher named Chris who became his wife two years later. During the next few years Chris and Bob became the proud parents of a daughter and son, Jessica and Greg, who were Bob’s pride and joy. Bob was a real family man and a devoted father and husband. His favorite place was home.

Bob spent 32 years in the district as a teacher as well as a baseball coach. He first coached at the freshman level and worked his way up the ranks to become the CNS varsity coach. In 1995 he was able to take his team all the way to the state finals. Baseball was one of his passions and he loved coaching, playing, and watching baseball, especially the NY Yankees.

In 2004 Bob was honored by being named to the North Syracuse Wall of Distinction. Later that year Bob and Chris retired and enjoyed an active lifestyle in their later years. They have been members of Beaver Meadows Golf Club in Phoenix for the past 30 years where Bob spent much of his time in the good weather. They spent winters at their second home in Bonita Springs, Florida, which enabled them to play golf and tennis all year. Bob was a natural athlete who excelled in every sport in which he ever participated. Though he had many interests and hobbies, most important to him was his time spent with his family. One of the happiest moments of his life was when he became a grandfather. In recent years his adored little grandchildren have brought him endless joy, and they loved their “Pop Z”.

Bob was a kind, thoughtful, and humble man who was well-liked and respected. He was dependable and reliable, and if he was your friend you could always count on him.

Bob was predeceased by his parents and sister Susan. He is survived by Chris, his wife of 46 years, his daughter Jessica of Los Angeles, and his son and daughter-in-law, Greg and Caroline, and their children, Eddie and Kiera, of Ardsley, NY. He is also survived by his brother Art, his aunt Diane Zacholl, and several nieces and nephews.

There will be a private service for the family at the Krueger Funeral Home in Mattydale. A Celebration of Life will be held at a later date. Donations may be sent to Clear Path 4 Vets, 1223 Salt Springs Road, Chittenango, NY 13037, or the Humane Society of CNY, 4915 W. Taft Road, Liverpool, NY 13088.
Read Less

To send flowers to the family or plant a tree in memory of Robert R. "Bob" Zacholl, please visit our Heartfelt Sympathies Store.

There are no events scheduled. You can still show your support by sending flowers directly to the family, or planting a memorial tree in memory of Robert R. "Bob" Zacholl.
Visit the Heartfelt Sympathies Store

We encourage you to share your most beloved memories of Robert here, so that the family and other loved ones can always see it. You can upload cherished photographs, or share your favorite stories, and can even comment on those shared by others.

Charlene M. Zebley, Karen Rudnicki and Joshua Brown, and other have sent flowers to the family of Robert R. "Bob" Zacholl.
Show you care by sending flowers

Posted Aug 01, 2020 at 11:13am
Dear Chris and family,
We will miss Bob as a colleague, coach and friend….he was the consummate educator and coach….always putting his students and athletes first. He had a dry sense of humor and his timing was impeccable….especially during Special Ed. or coaches meetings. Many good memories and good times from ye olde Special Ed. Summer School years. We will miss him…he will always be remembered.

Posted Jul 26, 2020 at 12:40pm
Our family loved this man. He was a huge part in our kid’s high school years. Douglas played baseball for him and Jenn kept scores, or whatever he chose to include her in. My husband, who passed in 2012, always made a point to speak to him at all the school functions. My mom was best friends with his mom Vi. Your journey will be difficult, but what a great man to cherish! Fondly, Susan Barnholdt Squire.
Comment Share
Share via:
SE

I first met bob in 1989 when he I played jv baseball at cns and he was the head jv coach. I then became his colleague teaching PE at cns when I started teaching in the fall of 1997. Not only was bob my coach and colleague, he was a mentor, a true friend and became like a second father to me. He had a way of commanding the upmost respect from people because of his high character and moral fiber he exuded in every facet of his life. A phenomenal role model for all of his students and players he ever taught/coached and for all of his fellow co-teachers/coaches. He began coaching me in 1989 and he never stopped, right up until his passing a week ago today. He taught me so many things that influenced my own teaching and coaching style, not to mention all of the life lessons that played a part in my personal life. Bob was a true loyalist.... if he considered you a friend, there were no limits on the lengths he would go to help you out if you were in need. I will always be forever grateful that our paths crossed and that I had the honor of having you as a mentor and friend. Rest In Peace
Comment Share
Share via:
L

Posted Jul 21, 2020 at 04:13pm
I met Bob in 1984 when we formed two baseball teams for the newly configured junior. We had over 120 boys to judge and choose to make two teams. We worked diligently to be as fair as possible. The two teams were as equal as we could get and it worked We stayed in touch over the years and Bob got me the golf coaching job years. He is a great man and may you keep your fond memories forever. I will not forget him.
Comment Share
Share via:
L

Posted Jul 21, 2020 at 12:47pm
Dear Chris & Family,
We are deeply saddened to learn of Bob's passing. He demonstrated love for both his family and the many children whose lives he impacted throughout his teaching career. We are truly blessed to have had Bob in our lives as well.
Deepest Sympathies,
Mark & Diane Chermak 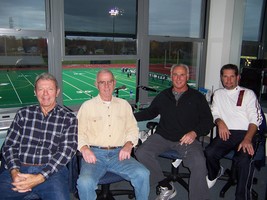