To share your memory on the wall of John Calabria, sign in using one of the following options:

John worked as a hairdresser for his whole career and owned and operated several salons in the Syracuse and Mattydale areas including Girl Talk, the Plaza Salon at the Hotel at Hotel Syracuse, John Edwards, Hair Studio 1000 and JEC Hair Care. He also performed hair styling and makeup for the Landmark Theatre and the Syracuse Opera. John was a member of the Local 9-IATSE Union for the Performing Arts. He taught styling at the Contemporary Beauty School during the 1990’s. John also worked as a platform artist for several beauty companies including Sebastian & Kenra.

John is survived by his wife of 14 years, the former Mary Christian; three daughters who he doted on, Anna, Catie, and Emma Calabria, all of Liverpool; brother and sister-in-law, Otto and Linda Calabria of Mattydale; eight grandchildren: Adriana, Angelina, Matthew, Michael, Dante, Isaiah, Analiyah, and Soroiya, and by several nieces and nephews.

Friends may call on Friday from 4:00 -7:00 pm at Krueger Funeral Home, 2619 Brewerton Rd., Mattydale. A Funeral Service will begin at 6:00 pm during calling hours and will be live streamed on our Facebook page.
Read Less

To send flowers to the family or plant a tree in memory of John E. Calabria, please visit our Heartfelt Sympathies Store.

Provide comfort for the family with a meaningful gesture of sympathy.

Show you care by sending Flowers

We encourage you to share your most beloved memories of John here, so that the family and other loved ones can always see it. You can upload cherished photographs, or share your favorite stories, and can even comment on those shared by others.

Love Todd, Eileen & Julie, Ryan Wicks, and other have sent flowers to the family of John E. Calabria.
Show you care by sending flowers

Posted Apr 17, 2021 at 01:32pm
To the Calabria's.....Mary, I'm so sorry to have heard of John's passing. I'd like to pass onto the family my deepest condolences. John had a great whit and humor about himself. He'll be greatly missed. Go Northmen Class of 75. May he rest in peace.

Posted Apr 13, 2021 at 10:40am
To the Calabria Family-So sorry for your loss-John was a family friend for many years and we were blessed to have known such a giving person. Our thoughts and prayers are with all of you. Rosanne & Jim Klink
Comment Share
Share via:

Posted Apr 12, 2021 at 08:16pm
Mary, We were so sorry to learn of John's passing. We always enjoyed being with him at family events. Due to my husband John's recent surgery we were unable to attend his services. I live streamed his funeral service and found it very touching and a loving tribute to a great man. With our deepest condolences, Cousin Renné and John
Comment Share
Share via:
F

Posted Apr 09, 2021 at 09:08pm
My condolences to John's family. John was a very special person.
John and I were great friends and spent a lot of time together
our teenage years. Rides downtown late at night in the green
Mustang, playing music loud, driving too fast, ( a little)!
John was a riot, a lot of fun. Fond memories. Rest in peace, John.
Comment Share
Share via: 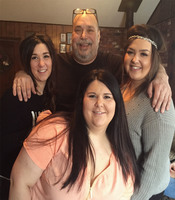