To share your memory on the wall of Ian Kirkpatrick, sign in using one of the following options:

He has played as a church organist for his entire life including 30 years at Trinity Lutheran Church in Syracuse, 3 years at St. David’s Episcopal Church in Dewitt and for the past year at the Anglican Church of St. Mary the Virgin in Liverpool. He also retired in 2013 after 20 years as a data specialist at Blue Cross Blue Shield Insurance of CNY.

Ian was predeceased by his wife of 23 years, the former Gale Rodney in 1996 and is survived by a brother, Christopher (Joan) Kirkpatrick of State College, PA; a sister, Stephanie (Marie Sagen) Kirkpatrick of Bellefonte, PA; as well as many friends in the music community.

All services will be held privately followed by a burial at St. David’s Episcopal Memorial Garden.
Read Less

To send flowers to the family or plant a tree in memory of Ian B. Kirkpatrick, please visit our Heartfelt Sympathies Store.

There are no events scheduled. You can still show your support by sending flowers directly to the family, or planting a memorial tree in memory of Ian B. Kirkpatrick.
Visit the Heartfelt Sympathies Store

We encourage you to share your most beloved memories of Ian here, so that the family and other loved ones can always see it. You can upload cherished photographs, or share your favorite stories, and can even comment on those shared by others.

Posted May 05, 2021 at 11:34pm
I enjoyed many years of Ian's wonderful music at Trinity Lutheran Church. He was a great asset to our church.

Posted May 01, 2021 at 03:51pm
Ian's hearty laugh always served as a source of support when I was conducting either Schola Cantorum of Syracuse or the choir of St. David's. He conveyed a positive sense of joy and comradeship in music-making. If there is a heavenly choir, he will surely be a most welcome new member.
Comment Share
Share via:
M

Posted Apr 30, 2021 at 06:50am
I am so sorry to learn of Ian's passing. I was a student at West Genesee and then worked one summer with Ian at Merchants Bank. He was kind, talented with a wonderful sense of humor. I always enjoyed our conversations. May God bless Ian. All of you will be in our prayers.
Comment Share
Share via: 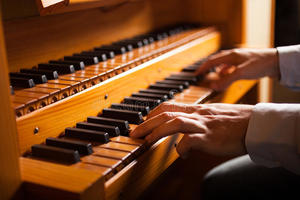